Where could I start? How much can one extract from a 3h workshop in order to make a fair assessment? The following are my observations, thoughts and opinions on the experience I had in the seminar and is not an analysis of any kind.

I have been practicing different styles of karate for some 26 years. I had a spell in Aikido for just under 2 years and I’m currently studying a little ju-jutsu and koryu uchinadi (KU). My experience, it’s safe to say, has been within the realms of Okinawan and Japanese martial arts.

I also must admit that my understanding of Chinese martial arts is very limited in both, its history and classification, which is something I’m working on.

The seminar I attended yesterday was organised by sensei Phil Aucott and delivered by Sifu Matthew Scott, who was assisted by many of his students, especially Kristian Clark. I must say at this point, before I share anything else, that everyone was so warm and welcoming. A true exchange of knowledge and fellowship between martial artists. 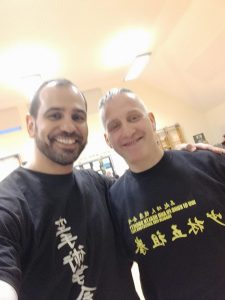 Sifu is very soft-spoken and there’s something very soothing and calming in his mannerism. Visually, one can tell he’s a very strong man, but impossible to understand the degree of his strength until you pair up with him for some pushing hands techniques. It was at this very moment I felt ‘something‘ very different to anything I’ve felt before.

The exercise consisted on pushing or pulling each other with extreme softness by properly rooting down. Now, rooting is a fundamental concept in karate, and so is softness, especially within those styles that share a common naha-te lineage. Goju in fact, means hard-soft and it is known that Chojun Miyagi, founder of Goju-Ryu, chose this name from within a poem of the Bubishi. Again, the historical background is out of the scope of this post and nothing I can say will surpass the research Hanshi Patrick McCarthy captured in his master piece, Bible of Karate Bubishi (1995) and Bubishi: The Classic Manual of Combat (2016).

Rooting is something I have achieved to execute with a fair degree of proficiency by studying and training with a devil-like attention to detail on correct bio-mechanics. In fact, throughout my karate life I have been obsessed, so to speak, with applying the optimum bio-mechanics that enables me the most effective and efficient execution of a technique.

Thus, applying my body conditioning by using the right muscles in the right way has delivered very good results in the past and yet, here I was, paired up with Sifu, working on this soft pushing hands drill and not only I couldn’t move Sifu an inch, I was lifted and sank with such ease I just couldn’t understand. There was something else going on here!

I tuned and sharpened all my sensory acuity senses and focused my visual, auditory and kinesthetic (VAK) system to identify the source of this energy.

“Can we do this again”– I asked. Same result.

“Hang on, let’s do this one more time. I want to check your footwork” – I begged. Again, lifted like a feather off balance.

I was in dismay: all my bio-mechanic expertise wasn’t enough. Not anywhere close. Sifu’s smile was anything but patronising. In fact, there was nothing patronising whatsoever on this session. Just many martial artist working together. It was very simple: Sifu had an understanding of something that I did not, Chi. This inner energy has many terms: Chi, Ki, Qi, Prana, to name a few.

The reader can chose to stop reading this post and promise I won’t feel offended. Many martial artist disregard this inner energy that flows within us; many simply discredit it and or believe it is some kind of Chinese folkloric mysticism. There’s a lot of rubbish and charlatans out there, I know, which hasn’t helped.

I asked Sifu how was he doing this and he explained – “I’m rooting with my tanden“. The tanden is also of quintessential importance in Japanese martial arts and it’s referred to as hara, albeit many karatekas don’t work this in any way. For those who want to explore this even further, you’ll like to know that it is with the control of our breathing and how we channel our Chi that we can access the vagus nerve, which is a whole new topic of discussion for another day…

Here is where everything is a little bit blurry and I will try to explain the best I can, whilst is fresh in my mind. Sifu explained he wasn’t rooting with his feet nor dropping the body weight, but with the tanden, using his breathing.

This led us to a profound conversation the interconnection of Man, Heaven and Earth and how the energy flows free (or not) across these three Principles. Again, Chinese folklore or a dimension of the human being we have failed to study and develop in the Western world? You decide!

Sifu explained he could listen my intentions with such ease he was lifting me or dropping me inside the hole (the void) every time I attempt to use my highly trained bio-mechanics. It was just hopeless.

“You are soft and relax” – Sifu explained.

“But to me you are hard and tense. It’s all relative” – He continued.

This was a very humbling experience:

First, as a karate instructor I am always asking my students to relax and find their softness in order to to express their karate with more inner power; and now I found myself on the receiving end of such message. There’s always another level to go!

Secondly, my frustration to understand how to relax in the way Sifu was explaining made me reflect again. Do my students feel equally frustrated when I ask them to relax (which is obvious to me they are not) because they don’t even know what I mean or how?

This experience made me grow as both, a martial artist student and coach.

I must share something that captured my attention and this is the fact that Sifu referred to feeling kinesthetically as to “reading” which was then corrected to “listening” and, on reflection, this synesthetic choice of word (reading is a visual experience and listening is an auditory  one) makes me think: does working on the mastery of the chi unite the VAK senses to become one? The Visual, auditory and kinaesthestic senses all become one harmonised experience?

“Ok, so how do you train the rooting, the softness and the chi” – I asked.

“San Zhan” – was the answer. “Everything starts and finish with San zhan and this must be practised many, many times daily” – Sifu continued.

We spent a fair amount of time working on the form and then testing it with pulling and pushing techniques. Very much like shime applied to our sanchin form, however the ethos and method in testing couldn’t be any more different.

At this point, I was paired up with Kristian, a very warm and welcoming student of Sifu. This experience was extremely insightful because I could feel within Kristian a strength that defied my own strength as well as my bio-mechanic skills. The softness of his moves were of such hardness I had to apply my 150% to just be in the game, so to speak. Kristian, in an act of wonderful humbleness, confessed he also also had to apply himself as he felt he resorted to physical strength in order to compensate mine and I had put him to test in using the rooting of the tanden and the chi. After this exercise, Kristian thanked me “for helping him”(!).

When we finished, we all gathered in circle and Sifu spoke to us for some 15 minutes. The conversation was deep in many layers, capturing many concepts which deserve a blog of their own, but to name a few we spoke about the importance of the transition from one state to another. We give way too much importance to the static stance and technique, but it is the “nothingness” between the flowing transition that matters.

Sifu also reminded us that “To perform san zhan with mastery, you have to become san zhan”. I absolutely get this, I really do.

This led us to discuss how we must behave as vessels and how we must empty it when it’s full, prior to putting anything else in. This was within the context of attacks (giving) and blocks (receiving). Not an easy concept to grasp. Sifu demonstrated some moves as Kristian was asked to attack with a punch and Sifu’s moves were of extreme sharpness and power and, I’m sorry for the cliche, moved like flowing water.

Throughout the seminar, Sifu reminded us of some fundamental energy principles, which I have researched to capture on this blog:

And the importance of how to apply this in the execution of our moves.

I could carry on, but I’m confident this captures the experience with enough detail for the reader to get an idea of what it felt like to experience san zhan for the first time.

My preliminary conclusion is that, on a personal level, I’ve worked my mind and my body with especial attention to bio-mechanics for many years, however I have not worked in a way that has helped me to develop or channel my Chi (or Ki). This is something I must address next.

My second preliminary conclusion is that most karate styles have been reduced to impact technology (kicking and striking) and this is especially true in sport karate. This reduces any opportunity to engage your hands with your opponent and the irony of the matter is that kumite means “entangled hands” in the first place. At SKA and KJG we train our grappling technology as well as practice regularly tegumi, but we do so with attention to body conditioning and bio-mechanics. We must find a way to introduce exercises on ki and tanden rooting if we are to become a well-rounded martial artist.

My third and final preliminary conclusion (for now) is that to achieve this level of mastery one has to train in a way that it becomes a lifestyle. In fact, you no longer “train” as if that was some kind of external activity that you add to your life whatever number of days a week; it actually becomes an intrinsic part of how you live your life and who you are.